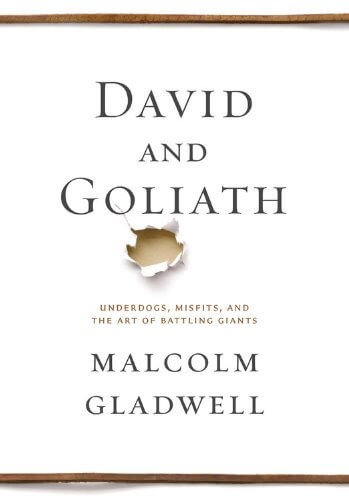 If you’ve spent any amount of time on this planet, you’ll have learned that hardships are just part of life.

Some struggles are common to everyone, while others (such as cancer, loss of a child, dyslexia, and poverty) are known by only a few.

If you’re a small business owner, you may have come across your own obstacles in your quest for success, and probably shook your fist at each one. But as it turns out, most obstacles are not the disadvantages you thought they were.

In his most recent book, “David and Goliath: Underdogs, Misfits, and the Art of Battling Giants,” Malcolm Gladwell examines the canonical story of history’s most famous underdog and comes away with a startling revelation. Not only was it unsurprising that David was able to beat the giant Goliath, it was almost impossible not to. (I’ll let you read the book for yourself to find out how.)

But don’t worry, you don’t have to be an ancient Israeli shepherd to benefit from being an underdog. Using a series of real-life stories from “disadvantaged” people throughout the world (and history), Gladwell points out that their simply being outcasts, misfits, and underdogs created the very circumstances necessary for their success.

The most surprising idea in the book was the concept of “desirable difficulties.”

Gladwell makes a distinction between difficulties that really are ruinous, and those that have hidden benefits that should make them more desirable than the alternative. Difficulties like not getting into an Ivy League school. Or large class sizes at your child’s school.

As Gladwell also illustrates, there is a tipping point at which most of the things we consider to be advantages (wealth, small class size, etc.) actually level off or even become disadvantages.

Remember the old banking adage of a few years ago? How everyone thought they were “too big to fail?” Turns out there is such a thing as being “too big.”

Being the underdog sure doesn’t feel like a blessing, but there are many ways in which being on the bottom can help you climb the ladder to the top.

Being the underdog forces you to work smarter, not harder. It familiarizes you with failure, and forces you to compensate for your shortcomings.

Think of all the stories of people who are blind, but have amazing hearing. Or all the dyslexic CEOs who have better reading comprehension now because they were forced to study harder.

In addition, underdogs are often overlooked but underestimated, meaning they are in the unique position of being able to sneak ahead of competitors who simply don’t notice them.

In short, everyone fighting their way to the top should stop and think about their motives first. Being in power is no walk in the park. You have ideals to live up to and people can (and often will) turn on you when things go bad.

Those in power have the tendency to crack down on mutiny with an iron fist, which alienates the people they are trying to control. As an underdog, you can take the humble, subversive approach and create a loyal following. As the Bible says, “a little child shall lead them.”

David and Goliath appealed to me for personal reasons and it forced me to rethink some of the struggles in my own life. But it can help with businesses, too.

If you’ve been feeling discouraged by your small business’ misfit status, think instead of the advantages you have. Maybe you are able to offer top-quality customer service. Maybe your lack of office space leaves you with a lower overhead and, thus, lower costs to your customers. Take the disguises off your blessings and turn them into advantages!

Clarity Creative Group is a web design & internet marketing company located in beautiful Orlando, Florida. We all thought Andrew Garfield made a pretty great Spiderman.
Save
Save

What To Watch Out For In an SEO Company

How To Use TikTok For Business